Reasons for not buying Tata's Nano

Needs to improve, Overall Experience I was tempted to buy the Nano but resisted myself as society people will look down upon on me as a poor fellow not having enough money to buy any other car. Last year my brother (doing a moderate business in village area) got an offer from his dealer that if he gives him the bussiness of certain amount he will gift him a Nano. He achieved it but instead of Nano he has taken money from his dealer to purchase some other car to avoid the same stigma even in the village society. Tata's advertisement as Nano the cheapest car for poor and lower middle class people has created the negative mindset. City people of service class (like me) who will purchase a car, after spending around Rs. 10000 to 15000/- p.m. (for fuel and maintenance, for hiring the garage space, EMI for car loan repayment, salary for driver etc.) does not like the tag of poor/lower middle class. They purchase the car to lift their status in the society. But Nano's negative advertisement actually has gone totally against it. Even if Tata now stops this advertisement as poor man's car or cheapest car, the irreparable damage has already been made. Few days back I read a market survey in Times of India. Which says... in the cheapest car segment, Maruti's 'Alto' scores high amongst all cars. It is because Maruti has never projected in the advertisement of 'Alto' as the cheap car. So it went off coolly. If you pay initially 40,000/- more (than Nano) you will get a car like Alto and people will not think Alto as poor-man's car like Nano. Recently one of my office colleague (initially decided to purchase a Nano and) took a loan from office and purchased another car as his wife and her friends felt the Nano won't lift their prestige and status in the society. His 12 year old son told him to purchase any other car other than Nano, as Nano is an 'Ek Lakhy car' and can easily be purchased by anybody at anytime. I don't understand what the hell Tata's market research wing was doing and unable to understand the simple logic of not calling the spade a spade, it hurts the ego who posses or belongs to it. 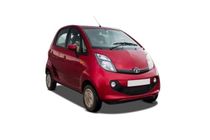 This is one of the worst review ...how can you say about a thing which u have never kept your hands on...n u say status...tell u what...if u own an alto..a guy in a creta ll treat u as a poor guy...n if u own a creta.. a guy in a Benz ll treat u as poor guy n it keeps on going... phew....so stop worrying abt this filthy society n live for yourself dude