I guess I am more apt to give a review based on my second month of purchase. We bought this SUV in December and just after a week, planned a trip to Kinnaur district, Sangla valley. Initially, I was a little reluctant as during that period temperature was sub-zero and full of snow. But at the same time wanted to test it 4*4 and terrain management system and power too on hills. This SUV has proved its mettle not only it's luxurious but a powerful machine. I drove with auto mode. It was cruising with so ease and hairpin bends were easily manoeuvred. Not even a single time that we had to reverse on most uphill hairpin bends. It proved its 480 torque. Somehow in Sangla, we took a wrong turn and ended up in village kind of terrain road full of snow. I used snow mode and this vehicle cruised easily. Then there was a steep downhill full of ice-coated layer, it was getting evening and were scared to get stuck in such conditions with family but it's downhill management system was so good that we could reach our resort safely. Barring a few software issues with infotainment, we loved this powerful and luxurious SUV. You may feel like you are driving a sports car. It just zooms with a press on the accelerator. Guys do consider this power machine if you want beauty and power like a beast. 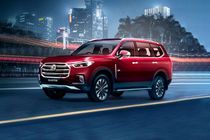