'Storm edge' have been used to describe new-age cars from the Korean firm. But don't be put off by them because the cars look modern and racier. While its flagship 'luxury' sedan Sonata is struggling to leave dealerships, the slightly smaller Elantra is flying out of showrooms giving it a sot of confidence with cars closer to those made by traditional luxury car makers from Europe. The third-generation Santa Fe, unlike its predecessor, will be assembled in India and not imported as a CBU, and that is proof of the new age confidence. The new car is a much bolder and edgier design than its predecessor. Gone are the anonymous, bulbous curves and panels and instead we have nicely sculpted and flowing lines that run all along the car. The new car looks less tall boy and more squatter with a sleek sloping A-pillar. The third window has been cleverly designed into a triangle of sorts and gives the profile a coupe-like effect. The front is characterised with an in-your-face hexagonal grille and nice swept back headlamps. Protruding bumpers and an exotic-looking fog lamp set-up complete the classy face of the Santa Fe. It no longer looks anonymous. 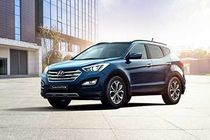