Hyundai Kona is the 1st SUV to run in India with electricity. Its design is of another level just like a futuristic concept model. It's just smaller than Creta in size. But it looks big. Near the bonnet, we can see the long indicator below it is the led headlamp just like the venue. The grill is missing in this car as its an electric car it doesn't need grill and air. 17.77cm touch screen infortainment system. There is no gear lever in it only buttons. The car is so quiet we have to look at the instrument cluster to now that the car is ON. It has 136 hp power and 395nm torque. Its battery pack is placed under cabin platform and it will protect the battery from water and heat. Placing the battery there will increase the car's stability. It has 39.2 kWh capacity Li-ion polymer battery. It has a range of 452KM when it's fully charged. It needs 39.2 unit of electricity to get fully charged. It has an 8year/160000km warranty. Its ex-showroom price is about 25.30 lakhs. Its service cost should be lesser than usual cars as it has no complex mechanical parts other than the motor and battery. It's available only through selected dealerships in India.

1 கருத்தை
1
U
u krishna murthy

We have booked the vehicle on 11th July 2019. We do not have any information regarding the delivery of the vehicle. 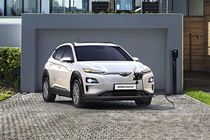 Exchange your vehicles through the Online ...