The most stylish hatchback with a powerful engine

The most stylish hatchback with a powerful engine

Mahindra and Mahindra , India's largest automobile giant recently launched its new hatchback, Mahindra Verito Vibe. It is offered with diesel engine only and available in three variants such as D2, D4 and D6. The price range of Mahindra Verito Vibe starts from Rs. 5.68 lakh to 6.55 lakh (Ex showroom New Delhi), which is rather reasonable and in the reach of middle class people like us. Because of its I.5-litre powerful diesel engine equipped, which is equipped with four cylinders, it can churn out a power of 64.1bhp and this hatchback gives an average fuel efficiency of 20.8 kmpl, which is quite impressive. It is integrated with a 5-speed manual transmission gear box. The acceleration and pick up of this vehicle is quite impressive with the top speed of this hatchback being about 145 kmph, which is rather thrilling for the passengers sitting inside, but at the same time it can reach from 0 - 100 kmph in just about 17 seconds. While driving at such a top speed there was no vibration in the vehicle and the road grip of this hatchback is also quite good.   The outsides of this vehicle are quite inviting and the company has given it quite a few good features, which we instantly liked. The wide radiator grille and the large company logo on the center gives this hatchback a classy look. The bumper of Mahindra Verito Vibe is body colored and it is affixed with the two bright round shaped fog lamps to enhance the visibility and the wide air dam helps in cooling the diesel engine faster.The power steering wheel is good and responsive, while this car also also has a trendy instrumental cluster and air conditioner, which cools the entire cabin quickly. Apart from these there is also an advanced music system with four speakers USB and AUX- In port, which was soothing and played good music. 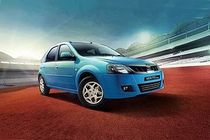 I guess this is not a hatchback. We can define it as a Fastback Sedan (which looks like a Hatchback, but actually 3-box with the boot is totally seperated from the passenger's cabin)