I Love The Audi Q3

Audi Q3 is undeniably the best car that I have ever owned. There is no doubt that they deliver the promise of 'Advancement through technology', and make it an absolute pleasure to drive, every single time. One look at it, and you know it's a typical Audi product, given its classy design. It also shows that the car was intended to be a lifestyle car, instead of a full-fledged off-roader. And that shows too. Though the strappy 2.0-litre TDI engine does deliver a high power, but the electronic stability control keeps me from enjoying a sporty drive. The Q3's suspension gives it better cornering abilities, but that also renders the ride a tad bit uncomfortable over a not-so-smooth road because of the S line suspension that firms up the chassis and adds larger alloy wheels. But it stays true to its promise of being efficient with the S Tronic transmission that disconnects the engine from the gearbox when you life off the throttle, which consequently boosts economy. With stats like 132kmph of top speed, and an ability to touch 62 kmph from 0 kmph in an impressive 8.2 seconds speak volumes about its pickup and acceleration capabilities. And despite its Quattro AWD system, and enhanced ground clearance, it is no match to the Land Rover Freelander. Moving on to its style, it is kind of plain and isn't really innovative. And it doesn't score much for spaciousness either. Pop the wide tailgate, and you see the 460-litre boot which can be extended to 1365-litres if you fold the rear seats. But it does quite well for its safety features, which include front, side and curtain airbags and ISOFIX child seat anchor points among other features. All in all, it offers the economy and versatility of a crossover, with the style and luxury of a premium 4X4. But it is still a bit overpriced compared to its competitors. 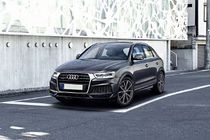