Harrier is a hit and so buzzard will. The buzzard is also based on the land rover platform like the harrier, buzzard and harrier are almost the same in all aspects. The only difference between them is that Harrier is 5 seater and Buzzard is 7 seaters and engine power figure will be more than the Harrier. As Buzzard is the elder brother of Harrier we expect that TATA will overcome shortcomings of Harrier in Buzzard, like giving a 4X4 option, sunroof and so on. Tata is giving everything what they have best. Harrier/Buzzard's platform is based on World's most famous and powerful suvs i.e. LAND ROVER. They are giving the Kryotec engine manufacturerd by Fiat, the same which Jeep uses in their compass and other models. Tata is our brand, this is giving more than other foreign brands in less price. Give them a chance. Tata is going to be KING again!!!

TATA Buzzard is it going to be SUV 7 seater, When Buzzard is going to Launch in India. What will be the Price. 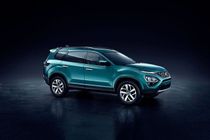