A Fun To Drive Hatch!

A Fun To Drive Hatch!

My uncle bought this car around 7 years ago! It has done more than 70k, went through the toughest roads of India with ease. Low and mid-range are good. Actually it's awesome. But the top end is where it doesn't match the rivals like Ford Figo. After 130 it feels like not sticking on roads. I drove it on Yamuna expressway at around 160kmph. It was like the car was gliding. Well, it's a Japanese engine, it loves to be rev. Best for the city and a long journey. It has a punchy engine, which enthusiasts love! 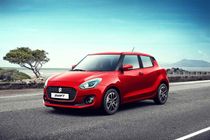