Jeep is finally returning to india

Jeep is finally returning to India, and this time it?s offering more than just the crude 4x4 utility vehicles. The 2014 Grand Cherokee Summit variant you see here, that's soon to be sold in India, promises the capability of tackling off-road obstacles just like before, but this time around, the Jeep will pamper its occupants with its extensive list of comfort features. From the exterior, the Grand Cherokee looks simply outstanding on and off the road. It?s brawny styling, those broad shoulders and daytime running lights, that big shiny grin of the seven-slat grille, the classy chrome-accentuated air dam and those 20-inch Satin polished cast-aluminum wheels (which look out of place out in the wilderness) are definite attention grabbers. The 3.0-litre V6 diesel motor under the Grand Cherokee?s hood doesn?t roar to life on ignition and when in line with competitive German SUVs, the Jeep isn?t the quickest off the mark, but it?s not exactly tardy either. We clocked it at 8.41sec from still to 100kph, which is good enough to get ahead of all those pesky hatchbacks and public vehicles. Start-offs were a bit jerky but the eight-speed ZF gearbox managed the engine?s 240bhp and 569Nm of power commendably, masking much of the Jeep?s 2,406kg weight. On engaging Sport mode, the engine gets a bit gruffer revving to 4,000rpm to the next shift, bringing with it a heightened sense of urgency. The Jeep?s steering wheel is loaded with more than 20 buttons that let you scan through a lengthy list of features, including messages list, suspension and 4WD setup, and radar-based cruise control, among other functions of little use. The single stalk that operates the wipers, headlights and turn indicators did take a while getting used to. The Grand Cherokee?s cabin is loaded with quality material and feels like a well-finished product, but the Jeep lacks the luxurious feel and attention-to-detail class of its German rivals. On the road, the suspension deals with large potholes impressively ? the chunky 265/50 R20 Continental tyres tackling anything that the municipal corporation can throw at it. Off-the-road the Jeep impresses by lifting up its skirts with three suspension level settings to help overcome rocks, mud, sand and snow with the assistance of the Selec-Terrain traction control system ? which functions on the lines of the system found in Range Rover vehicles. Switch off the traction control on a flat muddy surface and it?s all fun and games from there. Maneuvering around a crowded areas isn?t easy with the chunky A-pillars and big ORVMs restricting visibility. However the reverse camera with that 8.4-inch display, and the blind spot monitoring and collision alert sensors proved really helpful in turning this mammoth around. There?s no third row seating in the Grand Cherokee, but the humongous 1,544-litre boot will swallow every possible item you throw at it, including the kitchen sink. The numbers 2,987cc V6 turbo-diesel, 240bhp, 569Nm, 8-speed automatic, 4WD, 0-100kph: 8.41 sec, 30-35kph: 1.79sec, 50-70kph: 2.12sec, top speed: 257kph (claimed), weight: 2,406kg, boot capacity: 1,544 litres, fuel efficiency - city: 6.9kpl, highway: 10.8kpl The verdict The Grand Cherokee is right on par with its German competition once it eaches the Fiat showrooms. If owning a burly-bling, around Rs 70 lakh SUV interests you, the Grand Cherokee will surely deliver. We just wish the cabin tipped the flair scalemore on the grander side. 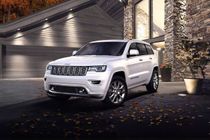